My very precious Noo came into our lives on 15th June 2008. She was taken in by the RSPCA in Lincoln as a cruelty case and then went to Honneybunny's rescue to find a partner before coming to me. After a couple of false starts she was bonded with Gabriel and made the journey up to me.

Right from the outset I was struck by how quiet she was, how lacking in bunny mischief and curiosity. I don't know if this was a legacy from her earlier life but it was sad to see, especially compared to Gabriel whose love of life after an equally horrendous start was a joy to see. She never joined him on his escapades but waited patiently for his return. She needed to feel safe and secure and didn't cope well with change, moving home from the hutch to the playhouse unsettled her so we made a special Noobox for her to sit in.

She did however love her food, I remember her chasing Gabriel in an attempt to relieve him of a treat. She also loved being out on the grass. The first time I saw her binky was a very special moment. She was very self-conscious about this and barely left the ground but as time went on the binkies became more exuberant and elaborate. Out of all the buns seeing her binky gave me the most pleasure. In time she also started to become more relaxed about Gabriel playing chase with her and would kick up her heels as she ducked in out of hiding places. He would chase her round the run, as she went into a tunnel he would head her off at the other end. Chris and I would always stop and watch when 'Chase Me' was being played.

Earlier this year Noo had a kidney infection which she seemed to recover from and as she had had a few episodes of unexplained stasis we started her on medicine to try and help. With bringing her in twice a day I became especially close to her, she was so good with the medicine and seemed to enjoy the snuggle time. Because of this she also became a lot more comfortable with me when with her outside.

On May 21st she lost interest in her food again, later in the day at the vets she laid down and went to sleep for ever.

I miss my little Noo so very badly, I hope she knows how much she was loved.

Sleep tight my sweetheart, be safe and happy at the bridge xx 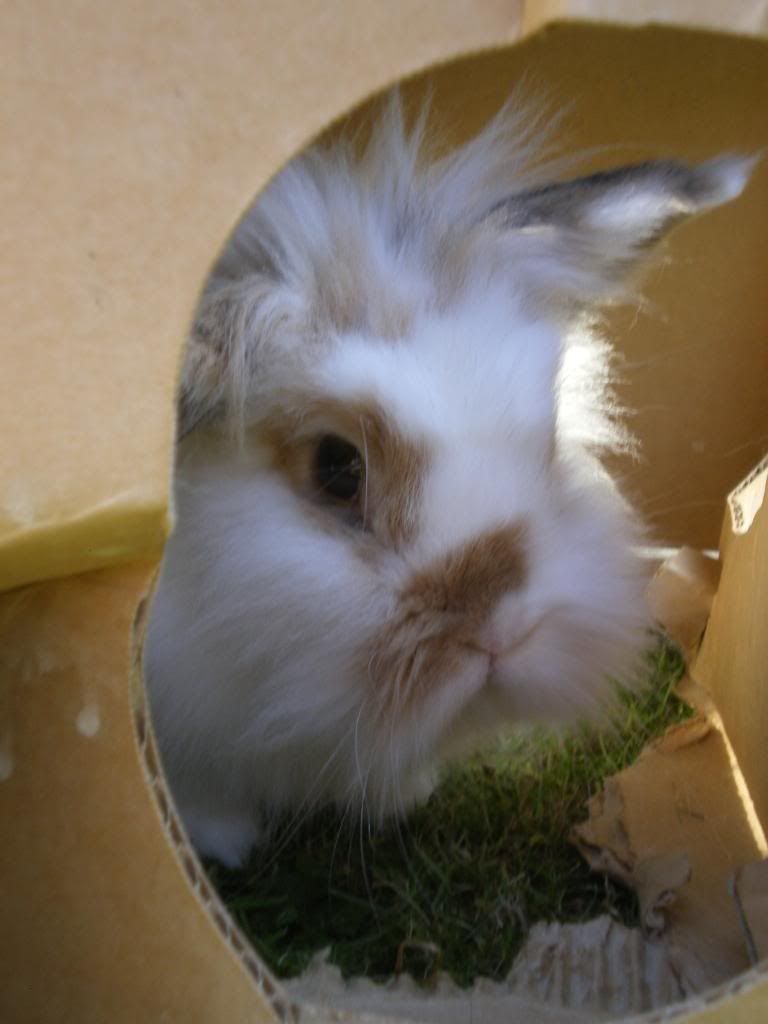 I'm so sorry about little Noo

She was such a beautiful girl, and how lucky she was to find such a wonderful home after a horrible start in life.

I'm so sorry you lost her, it was especially tragic after you and she had battled so long to make her better

Binky free at the bridge (and without being self-conscious about it), little Noo

What a beautiful girl she was.

I'm so sorry you lost her

Oh no Noo. I can't believe this. I am so sorry Vanessa. She was so lucky to find u. Binky free dear sweet Noo. X

Goodbye little Noo. You and Gabriel were a perfect partnership. He was naughty and cheeky and you were quite the opposite. I am glad that you emerged from your little cocoon and managed to enjoy your life. You certainly gave us a lot of pleasure.

Vanessa, I am so sorry you have lost her xx

What a gorgeous and special little lady you were Nia Noo.
We will all miss you and remember you.

I'm sorry Vanessa, there is no doubt that she knew she was loved and happy after her awful start.

This is so sad, I am so sorry for your loss love.

soo sorry to hear you have lost noo, but you gave her a great lovng home, she wll be looking after our bridge buns and also meeting rosie who you met too and dear locksley

, my current buns she will be looking down on as they enjoy those treat balls you gave us, she will be soo proud of what a good bunny mummy you are

So sorry to hear about Noo