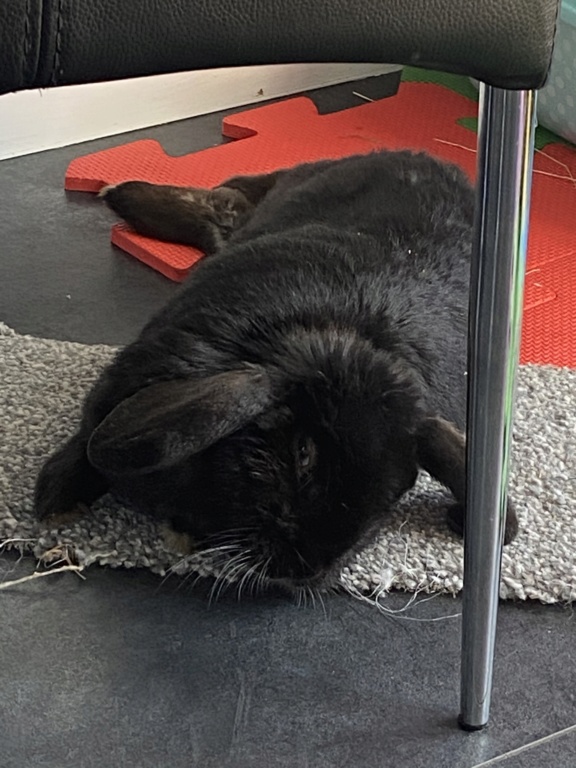 It’s not often my house is quiet enough for her to fully relax like this.

Aww adorable, they're strangely cute when they fall over sleeping like that!

She’s slowed down a fair bit since Junior. She looks like a proper old lady.

She’s still bright and begging for food sometimes but most of the time she’s just snoozing in the kitchen. I took this pic on a work day. It’s just me and her at home on these days and she just snoozes by the French doors.

I rarely saw molly sleep! She was like the Duracell bunny.

It’s so sad watching them age.

I remember Clawed growing old, she slowed down but never really changed. She was still my Angel with Attitude and she still ruled Misty (dog) with the same benign ferocity. She just looked old and moved that wee bit slower but there was no mistaking she was still Boss. She reached ten years old.

Of the others only Riley and Lil Loll managed to reach seven, and they neither of them really aged like Clawed. Riley was still a big lump of dopey joy and Lil Loll an independent cuss who just managed to admit to a little affection for his mum.

I think Clawed kept going, despite her having a touch of arthritis round her rear end, because she was motivated by her role as Boss Bun. She had a job to do and keeping Misty in line kept her young at heart, and she never lost that edge.

I think this is the case with molly. She doesn’t have Junior to boss around so she’s stood down, so to speak.

Aw... Molly, you're still the Boss Bun, just Boss of the humans now, which is a far tougher job than being Boss of Junior.