Bonnie passed away about 10.45 pm. she has not been well for a few weeks and has been on baytril and also had jabs containing anti inflamatories and gut stimulant. Nothing really seemed to help that much. Her back legs got weaker and she often had a dirty bottom. She also had bare patches on her back feet. I tried to keep her as clean as possible, using baby wipes and put dermisol and vaseline on her feet. She was always a very nervous bunny and did not like to be handled, but when she got the freedom of the garden, she was the binkiest bunny ever. She just loved to be dashing about in the open. To be honest she just has'nt been the same since her mate Dexy passed away 7 months ago, She has'nt been eating much lately and lost weight, this morning she had carrot tops, some basil and parsley, a few SS pellets and some dried herbs. At 4.00 she was in the garden and munched on some grass. When I brought her in we had a cuddle (almost unheard of with Bonnie) and she lay in my arms for a few minutes. I put her on the floor and she went over and lay in the corner for the rest of the night.
It was awful when I went to lift her up to put her back in her little shelter I'd set up for her in the dining room. she started kicking her legs and I thought I'd better put her down quickly as she was panicking that I was going to try and have a long cuddle again, but when I placed her on the floor she just went floppy, so I picked her up again and she was frantically kicking her legs then she started screaming in pain. I did'nt know what to do and shouted to Roger to phone the vet, but he said I think she is going. She stopped screaming and took a few breathes, then passed away. I cannot bear it that in her last moments she was in such pain, She looks so peaceful now, but to be in such pain in the last minute of her life is unbearable. It is so upsetting.
Rest in Peace Bonnie, go find Dexy and have fun at the Bridge. 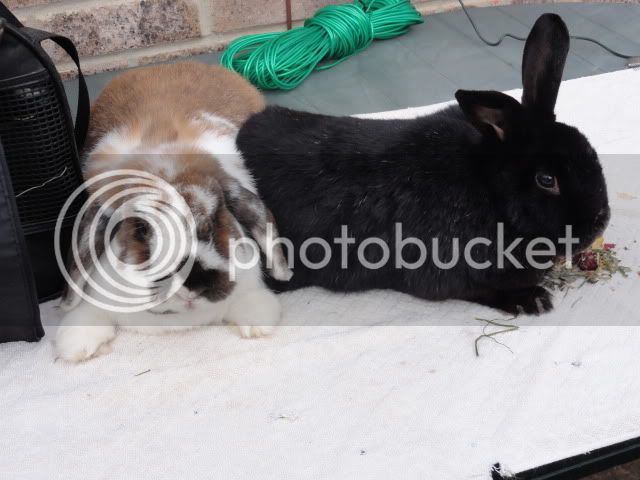 Oh huni, I am so very sorry to read this.

Have fun with Dexy, Bonnie x

I am sorry to hear this.

Have fun at the Bridge with Dexy Bonnie.

I'm so sorry for your loss Jo

Bonnie had a wonderful life with you and you did everything in your power for her. Please don't blame yourself, you are a great Bunny Mum.

Thinking of You xx

Hope she's happy at the bridge with Dexy

It must be very hard for you losing 2 buns so close, thinking of you

My heart goes out to you sweets, I am sending lots and lots of cuddles.

to you, what a beauty she was.

I'm sure she's having fun with Dexy now

Thanks everyone for your hugs and cuddles. we buried Bonnie in the garden this morning, I sprinkled Dexy's ashes over her, so now they are truelly back together. I have shed a few tears today, but have consoled myself with the thought that she is no longer in pain and is hopefully able to binky and dart about again with Dexy at Rainbow Bridge. x

You are more then welcome

Its such a very hard time when we lose our buns, let alone 2 within a year

My heart and thoughts go out to you

Oh I'm so so sorry to hear about Bonnie how very sad, it's not nice to hear them scream I know Bless her

Thinking about you Josephine

Bonnie and Dexy, frre together, Forever.

Take care of yourself, remember the good times.

Jo, I am so sorry that you lost Bonnie, but just think of the joy and happiness you gave her in her life, you did everything you could for her

Binky free at the bridge Bonnie, have fun when you get there xx

Jo, I have just seen this.

I am so sorry you have lost Bonnie, and I'm sorry that it was distressing for you.

I'm sure it was over very quickly for her.

She will have had a lovely life with you as her mum, and won't be suffering any more. She'll be with Dexy now.

Jo I'm so sorry I missed this, and so very sorry about Bonnie

Sending lots of hugs to you at this sad time. Bonnie was a lucky girl who had a lovely caring home. I am sure you did everything you could for her and being with her in her final moments, although distressing for you, was probably a enormous comfort for her. Her cries may have been through stress rather than pain. Glad that she is back with her soulmate Dexy. xx

I'm so sorry . But just remember , no matter what happens to Bonnie , nothing can part you two . No matter how hard things get she'll be there for you .

Really sorry to hear this, big hugs to you xxxx 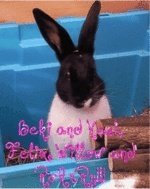 Oh jo I am so sorry to hear this.

I hope that you are okay, Im thinking of you honey x x x

I am so so sorry Jo. Binky free Bonnie x

So sorry, she will be snuggled up with Dexy now. x