Sunny, this is one of the hardest things I have ever had to write, and it has taken me a year to be able to do it. But I can do it now, to let other people know what a fabulous little bunny you were and to let you know that I have not forgotten you (and never will)

You were Sparky’s litter-mate, born on April 9th 2011. There were five of you, but one died at two days old and one at about ten days. That left you, Sparky and Rocky although none of you were named then – just two little grey-and-white bundles of fluff, and you, a black-and-white bundle of fluff.

You were slow developers, opening your eyes and venturing out of the nest later than your older siblings had done. When you did open your eyes, they had a tendency to be a bit gunky but the three of you very patiently allowed me to gently bathe them with salt water and after a few days we got them nice and clear. Then there was no stopping the three of you. I’d handled you all so much that if I came and sat at the front of the hutch, I would have you climbing all over me, and if you got half a chance to get past me, you would be off across the run. I had to build taller and taller barricades across the hutch door and even then would find the odd baby bunny in an unexpected place.

I went on holiday at the beginning of May. When I got home I found that your eye had gone very gunky again and you had a snotty nose too. I took you to the vets, who put you on a little dose of Baytril as you were only five weeks old and tiny. I had to give you a name for the vet, and you had such a sweet disposition that I instantly named you Sunny. After some agonising about taking you away from your Mummy, we brought you into the house so we could keep a close eye on you and keep you warm.

You absolutely loved living in the house with us. You had an old fish-tank turned on its side for a base, with a blanket and your hay and water in it. I didn’t realise then how amazing it was that you were completely litter trained and only ever went to the toilet in the corner of your tank-house. I spent a lot of time with you, as you had been removed from a large colony of bunnies and I didn’t want you to get lonely. You would be as good as gold as I bathed your eye and gave you your Baytril, making no more fuss than needing to wipe your mouth afterwards (little did I realise the adventures I would later have with bunnies and Baytril). But after meds, you did insist on climbing up onto my chest and having a fuss and a sleep. You would lay over my heart and sleep for hours as I read a book while trying not to move too much and disturb you. When you were awake, you were fascinated by my feet and would dart around them, doing a pathetic baby bunny version of a binky while barely leaving the ground, then trying to pull my socks off

You were a people bun and liked nothing better than being in the company of me or your Hudad or, even better, both of us. In turn, you were absolutely charming and we both fell head-over-heels in love with you.

After a week or so, the Baytril seemed to be working – you were a lot better and as we had never intended to have a house bun (oh, the irony) we decided to re-introduce you to your littermates and make arrangements to move you back outside. We brought your littermates in, and of course it was like you had never been apart. We had to name them too. One of them was a real live-wire and got called Sparky. The other was quite timid so got called Rocky (after the chicken out of Chicken Run). The three of you spent a few days inside, and Hudad built you a special little hutch outside and penned off part of the big bunnies run. It was early June and lovely warm weather when we moved the three of you into your new outdoor accommodation. You all loved being outside too, poking your tongues out through the fence at your siblings and finding ways to escape your little pen until Hudad closed off every tiny gap you found.

A few days later, we went to the vets on the Friday. You sat on my shoulder in the empty waiting room and made all the vet nurses go ‘aaaawwwww’. Although you were a lot better, you still weren’t completely clear. The vet increased your dose of Baytril and gave us Tiacil eye-drops for your eye, which was still slightly sore.

On the Saturday morning I got up and brought you in, gave you your meds and a cuddle and put you back out with Sparky and Rocky. I left you tucking in to your breakfast while I went out to get my hair cut. You were loving and lively and absolutely fine. When I came back from my hair appointment and came round to check on you, you didn’t come belting out of the hutch at the sound of my voice as you always did. I lifted the lid and there you were, head thrown back, mouth breathing and obviously really struggling to breathe. Your nose was incredibly snotty and obviously completely blocked – this had happened in less than a couple of hours.

I was frantic. I took you indoors with me as I phoned the emergency vet – I didn’t dare let you go. We got straight down to the vets but there was little they could do as you were still so tiny you could sit on the palm of my hand. They gave you some mucolytic in water and gave me some recovery food and advice on nursing you. Then we were on our own.

We tried everything, sweetie. We tried to wipe your nose clear. We had you over a bowl of Vicks, and in a steamy bathroom for ages. There was Olbas oil on everything. We tucked you up and cuddled you and kept you warm and syringe fed you ever so very carefully. You seemed to brighten up a little in the evening, and sat and watched some telly on Hudad’s computer with him. We made you up a cosy box and tucked you in the corner of our bedroom when we went to bed. I set my alarm for two hours to get up and give you a feed.

You had other ideas. I’d barely closed my eyes when I heard scampering under the bed. I got up, fished you out and tucked you back in your box. This time I almost dropped off to sleep before I heard ‘thud, scamper scamper scamper’ again. You kept coming under the bed to right under where my head was laying on the pillow. I didn’t know if you were trying to be with your humans, and I didn’t dare bring you in bed with us as you were so small. So I got up and we went downstairs, leaving your Hudad asleep. I settled you into a box down there and watched you. Every time you fell asleep, your head would drop so you couldn’t breathe, and you jerked awake again. You were obviously incredibly tired and desperate for sleep. I tried propping your head up on a blanket but just could not get it the right height or shape to support you and allow you to sleep.

Eventually I ended up half-laid back on the sofa, with you laying over my heart where you had spent so much time, and your head propped up on my right boob

That was perfect, just the right height and the right amount of support. You finally fell into a deep sleep.

I watched you for hours. Every now and then you would wake briefly and I would take the opportunity to get some food or water down you. But it was never long before you were asleep again; you were absolutely exhausted. You were still really struggling to breathe and I willed each breath into you with all of my heart.

At ten to five in the morning, on Sunday 5th June 2011, you gave a little start and died. You were eight weeks and one day old.

I buried you at the top of the garden, and later put my favourite tree - a Magnolia – over your grave.

You were a tiny bunny who made a huge impression in a short time. You were my heart bunny, and when you left, you took a little piece of my heart with you. Keep it safe, because one day I’ll be there to check on it.

Apart from a very blurry one of you in the nest, I only have the one picture of you, from that night when you were so very poorly. I didn't know our time together was going to be so short 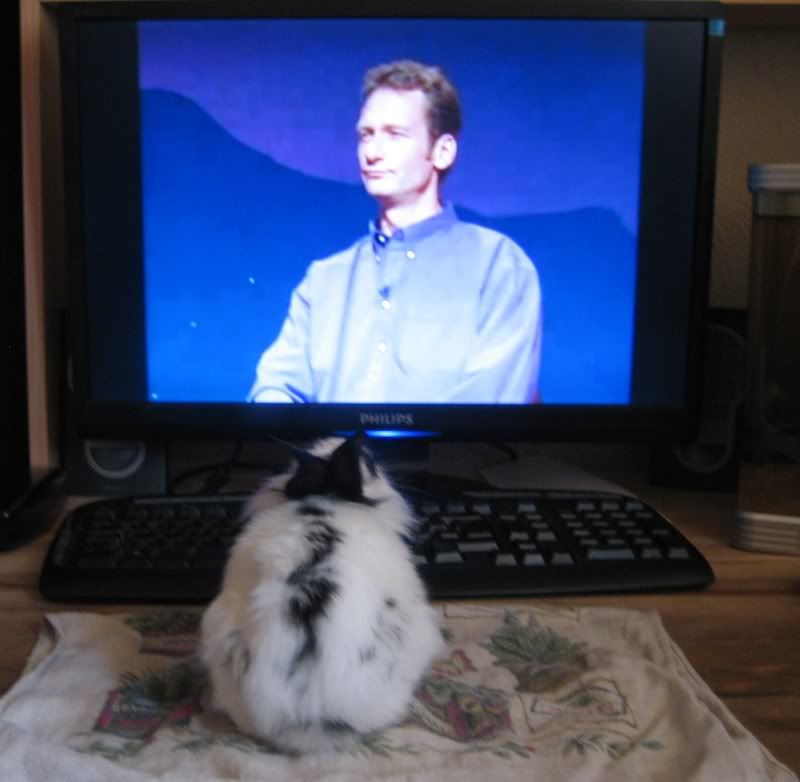 that story was so touching, binky free little sunny

What a lovely tribute to such a special gem. I've got so many tears in my eyes now, a big

for hu-mum is needed now. The photo is so lovely

'Such a lovely tribute'

It sounds like Sunny was a very special little girl

I know how hard that must have been for your humum to write Sparky, please give her a hug from me

and thank her for sharing Sunny's story with us x

to Sparkys Humum, that was a lovely tribute. What a special little bunny

Such a short life but a massive personality.

I had a hamster called Sunny, I love the name.

You were very special Sunny, and so very loved.

You left your pawprints on your Humum's heart. xxxxxx

I know you are waiting for your humum at he bridge love, one day we will all be together.

A really lovely tribute but I can't read them without being in floods of tears, but I don't think I am the only oe there.