I've debated popping back on here for a while. I do infrequently check the forum as a guest, but I feel like I’ve been absent for far too long to randomly comment.

Obviously, given the topic I’m posting under, I have come to share some sad news.

Yesterday morning, I grabbed a handful of baby carrots, and went down to the bunnies’ room. I ended up dropping the carrots at the door, as I was only greeted by Hippo’s eager face. Typically, they are both anxiously standing at the cage door when I walk into the room. Brynn was in the litter box. She was so still; I honestly thought she was already gone.

I touched her back very gently, and she immediately started a seizure-like convulsion. She ended with her head *in* the water dish, so I had to move her, which spurred on a similar reaction. Agonizing.

I jumped in to panic mode (she has been unable to gain weight and she has gone into stasis a few times recently – unfortunately, Canadian vets know less than I do and can typically offer little advice or assistance), and I started pumping her with water and critical care. I fear now that I made the worst possible decision; I likely just prolonged her painful demise a few more hours. She was so far gone.

I knew she was dying.

I finally gave up the obviously lost battle, and I called my mom (because who else do you call when you’re in crisis?). She rushed over. My immediate reaction was to rush Brynn to the vet – because that’s what a good owner is supposed to do – but my mom begged me not to, “Let the dying die in peace, Linds,” she said with tears in her eyes.

She relayed to me what I already knew: taking Brynn to the vet would cause her to endure so much unnecessary suffering. Brynn always hated being picked up, she didn’t trust strangers, and she went out of her way to reject medication of any kind.

All I wanted for her was the most painless and quick passing possible, and suddenly I realized that taking her to the vet would ease my pain but would only increase hers. I took Hippo out of the cage (because he’s really unaware about this kind of thing… I’ll explain later), and I left her in peace. My desire was to pet her, hold her, and comfort her… but she was never a “people” rabbit. I gave her the only offerings I had for her death: peace, stillness, and dark. I left her around 9am (she hadn’t moved – other than faint breathing – in close to two hours). I came home around noon, and she was gone. All I can hope was that her transition into the darkness was painless.

The whole morning, and especially the shaky drive home, I was praying that she would just die. It probably sounds so grotesque and inhumane to you – but I just wanted her to finally go to sleep and be free from pain. I just really can’t express how grateful I am that she passed quickly. She was a small girl, but always a fighter; I was fully prepared for her to hang on for days.

I haven’t come back here for personal condolence. Lord knows I don’t deserve it. I’ve been so busy with work and the puppy (if you didn’t know: I got a puppy at Christmas and she is a full grown terror now) and I haven’t given the bunnies’ nearly the attention they deserve. (I’m feeling terribly guilty and racking my brains for clues about Brynn’s sudden passing). I’m here because my little guy Hippo is now breaking my heart. He’s having a really hard time. (I can’t even write about it right now because my tears too steadily block my view of the computer screen.) Please send Hippo any vibes of condolence for the loss of his favourite girl. I’m going to post another message for advice about how to help him deal with this.

Brynn looked like a batch of cookie dough ice cream, but she wasn’t nearly as sweet… and that’s what I loved about her. 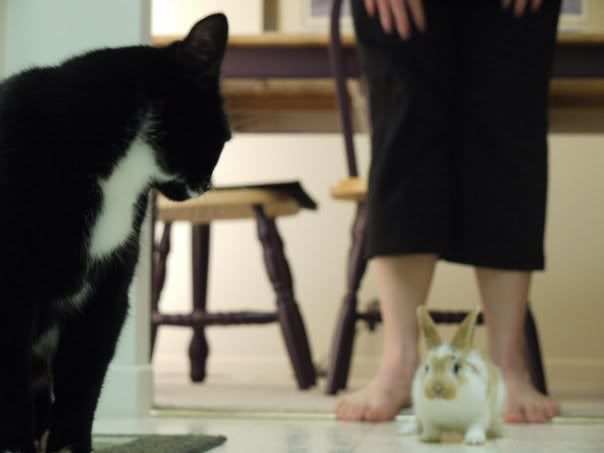 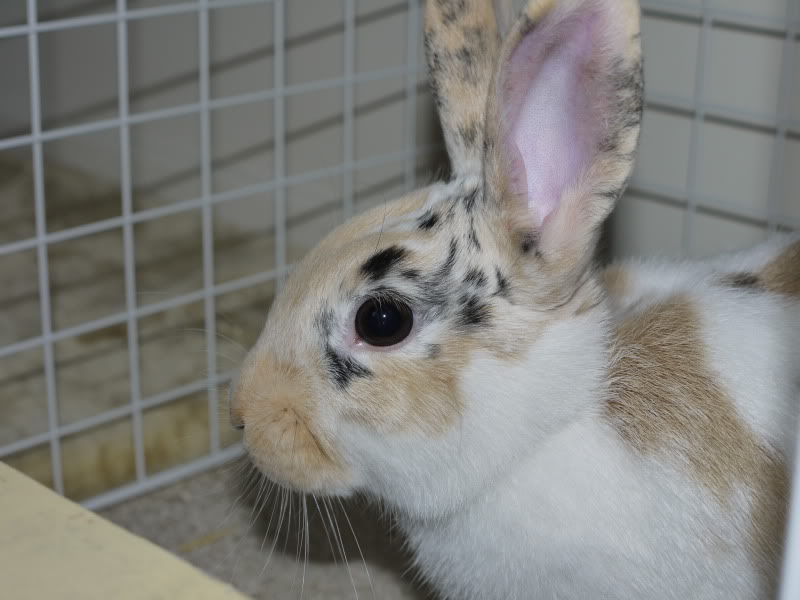 Such a beautiful bun Brynn was!

I know your heart is broken. I'm sending comforting vibes for you and Hippo.

What a stunning girl

Binky free at the Bridge, Brynn

Don't beat yourself up about the circumstances of her passing - in those situations there are no rules. You have to make the decisions on your own and that is incredibly tough and almost always loaded with guilt that you should have done the complete opposite. Nobody knew Brynn better than you did, and you made the decisions you did with her best interests in mind. I have no doubt she had a very happy life with you.

My sincere condolences to you and Hippo for her loss

So sorry for your and Hippo's loss. Sleep tight Brynn.

Sending hippo vibes, hope both he and you will be ok

Oh hun, of course you deserve some sympathy! In life we naturally always go through phases where things take focus, and while we always love our buns and give them everything they need sometimes you have other things going on too - its just life. You loved Brynn and you gave her a lovely life, and it isnt your fault shes gone.

I am so sorry, and dont ever think you cant just drop in, of course you can x 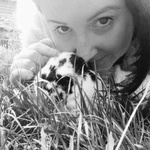 She was a gorgeous girl!!

Aww I am so sorry to hear that the beautiful Brynn has passed on. I know how much you and Hippo loved her.

I completely understand how you felt, in that you wanted her to have a dignified and peaceful end. She didn't seem to be in pain so it was purely a question of waiting for death to come to her. I think you did the right thing for her and that is what is important.

I know that your life took a very different turn and that we don't hear from you very much, but it is kind of you to let us know the news as we really understand your loss.

Even though you don't come on very often, please never feel bad about not visiting a lot. A once in a while post is enough for us and it is always good to touch base with our Canadian outpost.

Sending you and Hippo lots of vibes. xx

Im terribly sorry that you lost her. She was beautiful

Dont beat yourself up, it is incredibly hard to make those decisions on the spot and in a short space of time. We can only ever do what we think its best at the time, dont blame yourself.

Hugs to you, we all understand how your feeling, and as people have been telling me over the last few weeks. It will get easier, and it does, but they will always be in your heart, always. xxxx 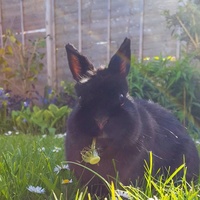 I'm so sorry for your loss, but please do not beat yourself up, it really sounds like you did the best possible thing for her.

Thanks for the kind words, all.

Brynn was stunning what beautiful markings, I'm so sorry you lost her